Jacques Callot’s Engravings of the Church of the Nativity, Bethlehem 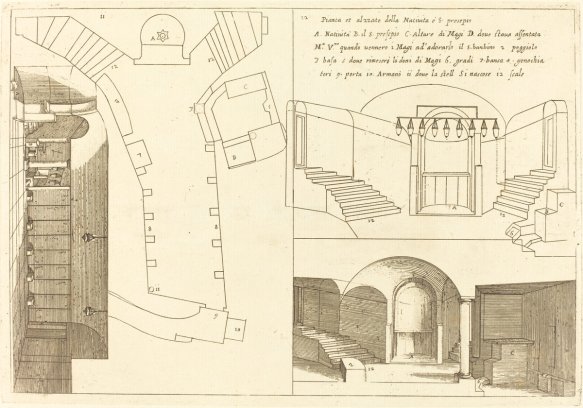 Jacques Callot (French, 1592 – 1635 ), Plan and Elevation of the Church of the Holy Nativity, 1619, etching and engraving on laid paper [restrike], National Gallery of Art, Washington DC / Transferred from The Library of Congress

Jacques Callot (French, 1592 – 1635 ), Plan of the Church of the Holy Nativity, 1619, etching and engraving on laid paper [restrike], National Gallery of Art, Washington DC / Transferred from The Library of Congress

In 1619 the French artist Jacques Callot prepared numerous prints of sites in the Holy Land to accompany the second edition of the Franciscan Bernardino Amico’s Trattato delle piante & immagini de sacri edifizi di Terra Santa (Florence: Pietro Cecconcelli, 1620). The Church of the Nativity in Bethlehem and its adjacent monastic complex are documented in seven plates at the beginning of the volume. Callot’s engravings were based on Amico’s own architectural surveys performed in Jerusalem and Bethlehem during his five-year stay in the Holy Land from 1593-98.

A star in the pavement of the crypt-like lower level grotto in Callot’s image marks the traditional location where Jesus is said to have been born, just as is the case today – though the present star has fourteen points rather than the six depicted by Callot.

Amico intended the publication to serve as both an accurate antiquarian treatise on the holy sites as well as a devotional aid for pilgrims. Its function today can be similar, reminding us that the epicenter of Christmas is not the North Pole but rather at the heart of this rich architectural palimpsest in Bethlehem.

● UNESCO World Heritage listing description of the Church of the Nativity and Pilgrimage Route, Bethlehem

The traditional site of Jesus’s birth in the grotto underneath the Church of the Nativity, Bethlehem
Source: Wikimedia Commons / public domain