The Chapel of the Holy Shroud reopened this weekend after a decades-long restoration campaign. The chapel had first closed in May 1990 when a small piece of marble detached from a cornice and crashed to the floor. Repairs proceeded sporadically over the next several years. In April 1997, the restoration was nearly complete when a devastating fire hit the chapel. The wooden boards on some of the scaffolding caught fire, for reasons never fully determined. The great height of the chapel acted as a chimney to pull the flames upward and fan the fire. Although the marble could not burn, it cracked and changed color because of the intense heat. Splintered fragments of the originally black Frabosa marble fell to the pavement. As later emerged, the structure of the chapel and its dome were largely intact, but the subsequent restoration was fraught with conflicts, setbacks, and a lack of transparency. After multiple missed deadlines, the restoration is complete and the chapel accessible to visitors.

Position of the Cappella della Sindone between the Cathedral of San Giovanni and the Palazzo Reale, Turin

Located between the Cathedral of San Giovanni and the Royal Palace in Turin, access to the chapel was originally provided from both buildings. That meant that members of the Savoy dynasty could enter the chapel directly from the palace, but also that the faithful could enter from the cathedral, as well as view the chapel directly above and behind the high altar of the cathedral. During much of the twentieth century, though, visitors entered from the church side, via the stairways from the two doors flanking the high altar of the cathedral, while the palace doorway was rarely used. With the reopening, the chapel now forms part of the Musei Reali in the Royal Palace, and will be accessed from the palace side, with the cathedral doors closed. The shroud itself is now stored elsewhere. 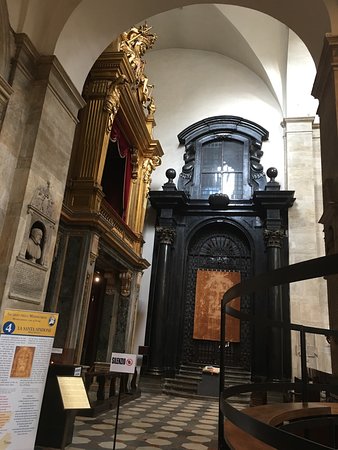 The portals in the cathedral giving access to the stairways leading to the Shroud Chapel will now remain locked. Source: TripAdvisor

While the successfully completed restoration must be seen as a triumph – reinstating one of the most stupendous spaces in early modern European architecture – the incorporation of the chapel in a museum circuit is symptomatic for our age. Divorced from its relation to the church, devoid of the relic that originally prompted its construction, Guarini’s chapel has become yet another event for cultural tourism.

Beginning Tuesday, 2 October, the chapel may be visited as part of the a general admission ticket to the Musei Reali Torino.

● The Art Newspaper provides a convenient English summary of the restoration campaign.

● John Beldon Scott’s 2003 book Architecture for the Shroud: Relic and Ritual in Turin (Chicago: University of Chicago Press) remains essential reading for the historic background of the Shroud Chapel and the earlier repositories of the relic. See also my review of Scott in Annali di architettura 16 (2004).

● My other posts on the Shroud of Turin.