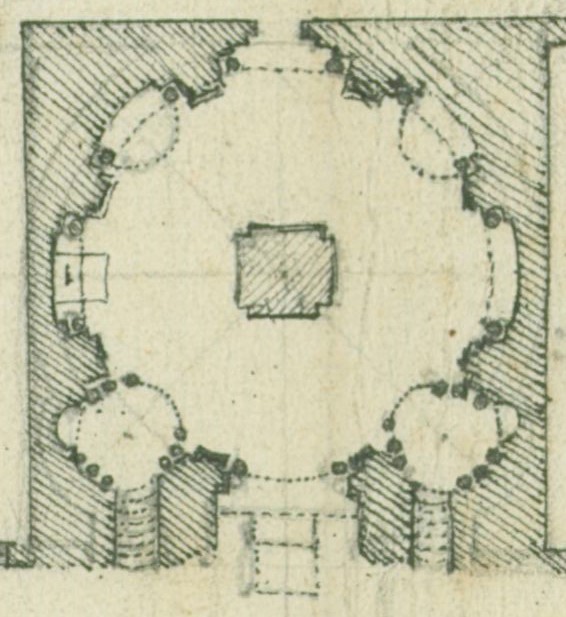 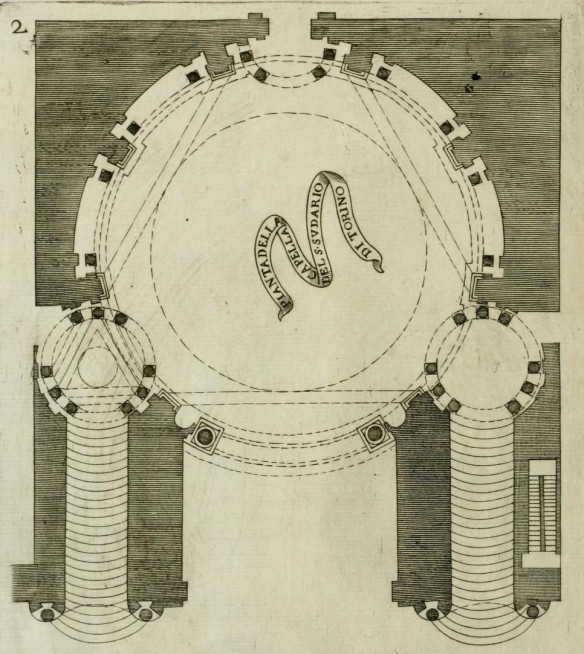 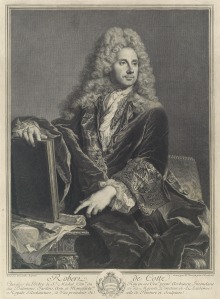 The French architect Robert de Cotte (1656-1735) stopped in Turin in 1690 as part of a six-month study tour to Italy. Four drawings by de Cotte of Turinese buildings survive in the Bibliothèque Nationale in Paris: plans of three major palaces (Palazzo Graneri, Palazzo Carignano, and Palazzo Reale, discussed here), as well as a typical facade elevation with arcade on Piazza San Carlo.

The plan of the Palazzo Reale (seen in full below) also includes a detailed plan of the Cappella della Sindone – the chapel housing the Shroud of Turin – in its location where the palace abuts the cathedral.

While de Cotte depicts the correct number of openings and niches around the perimeter of the chapel (eight, seen in the uppermost image), he has placed them at regular intervals rather than in the more complex arrangement designed and built by Guarino Guarini beginning in 1667. In Guarini’s plan (second from top), the single wide bay between the two access staircases opening toward the high altar of the cathedral takes up a segment of the perimeter equal to that of two niches on the other side of the chapel. In effect, this single opening is a double bay, and the geometry of the building’s plan is based on a nine-part articulation of the perimeter, rather than the more conventional eight-part scheme indicated by de Cotte.

De Cotte’s pencil underdrawing for the plan literally underscores the difference between the building as built and as recorded by the French architect: the chapel in the study drawing has two major axes oriented toward the cathedral nave, as well as two diagonal axes, defining a regular eight-part division of the circular plan. Guarini’s engraved plan, instead, features an inscribed triangle representing the arches of the vaulting at the level of the false pendentives directly above the cornice ring of the first level, highlighting his articulation of the perimeter in units of three or nine.

On comparing the two plans, an obvious question arises: did de Cotte make a mistake while preparing his sketch of the chapel? Or did he intentionally “correct” Guarini’s unconventional design?

By 1690 major construction at the Cappella della Sindone was completed, although the chapel was not officially inaugurated until 1 June 1694 when the relic was deposited in the shrine atop Antonio Bertola’s central altar. Nonetheless, travelers could enter the chapel, and indeed de Cotte’s description of his visit to the building survives.* Plans of the chapel would have also been available to travelers, since Guarini’s Dissegni d’architettura civile, et ecclesiastica had been published in 1686, three years after the architect’s death. This volume included the plate illustrated here.

With ready access to the chapel, and published plans of it in circulation, any competent architect could have sketched a more or less accurate plan of the building embedded between the royal palace and the east end of the cathedral. One can only conclude that de Cotte’s plan of the Cappella della Sindone is to be understood as a critique, regularizing the plan to bring it in line with the more conventional architecture principles current in late seventeenth-century Paris. But one question remains: how did de Cotte imagine the vaulting of his “classicized” Shroud Chapel? We will probably never know, but it certainly would have been more traditional than Guarini’s marvelous solution.

The chapel is currently scheduled to reopen in 2017, twenty years after the tragic fire of 1997. 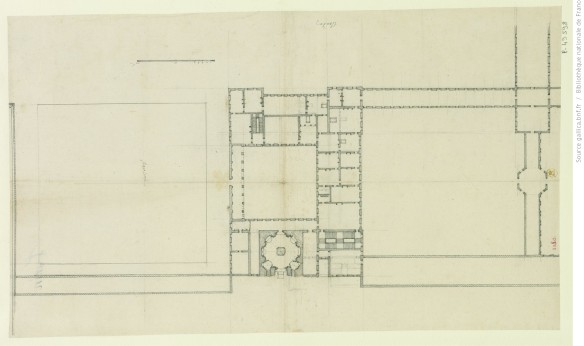